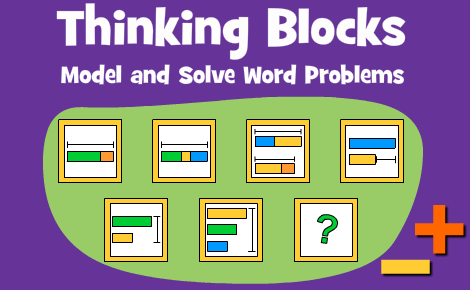 Math word problems can be a challenge for young learners. It’s particularly daunting for students who are struggling with reading comprehension or learning English as a second language. One way to level the playing field is to teach word problems visually. All of the common word problem types, such as part-part-whole, comparison, joining, separating, multiplication and division, can be expressed with simple but effective images that illustrate the numerical relationships within the word problems.

various Thinking Blocks models
Visuals, like the ones pictured above, are commonly known as bar models or tape diagrams. They’ve become quite popular in elementary classrooms in recent years. Bar models can be a very useful tool but only when clear representations are drawn.

For students in my 3rd grade math class, drawing advanced models proved to be difficult. They became frustrated with both the process and the errors that would inevitably arise. I wondered if conceptual understanding would increase if students could build bar models with blocks. What sort of the learning would take place once bar models became a more tactile experience? I used measuring blocks to help students physically model word problems. It was a good start but, like drawings, the unchanging nature of the blocks reduced their usefulness. 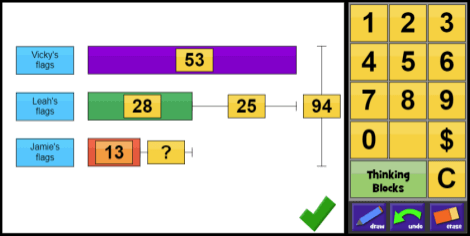 solving a multistep word problem
To overcome the limitations of the measuring blocks, I developed a system of virtual blocks that could be used to model almost any math word problem. These “thinking blocks” provided a powerful way to organize information and simplify problem solving. Thinking Blocks not only revealed what was to be solved, it illuminated the process as well. That was its superpower. Since then, Thinking Blocks has become a transformative math tool, teaching millions of students around the world how to model and solve word problems.

a three step approach
When introducing Thinking Blocks, I begin with a simple model and then, with help from my students, work backward to create a word problem. The model I use at first contains nothing more than blocks; it has no numbers, labels, or other visual information. I start by asking a series of guiding questions.


What do you notice about the blocks in the model?
The red block is longer the blue block.
The blue block is shorter than the red block.
I then add brackets to the model to draw attention to the difference.


What else could you ask about the blocks?
How much longer is the red block?
How much shorter is the blue block?
Now students are ready to identify known and unknown quantities. I vary the positions, asking my students each time what the question could be. Guiding students in this way provides the foundation they need to move toward higher level thinking.

From here, we look at more abstract problems. These are word problems in which the blocks represent other types of quantities such as the number of red and blue balloons, the weight of two different puppies, or the number of children who voted yes or no in a poll. Students make up word problems, personalize the stories, and change the known and unknown quantities. They are now well-prepared to complete the problems in Thinking Blocks.

4 Great Reasons to Use Thinking Blocks

Thinking Blocks and the Common Core